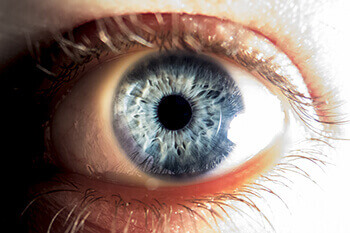 Epithelial erosions can be a chronic problem. They may alter the cornea’s normal curvature, causing periodic blurred vision. They may also expose the nerve endings that line the tissue, resulting in moderate to severe pain lasting as long as several days. Generally, the pain will be worse on awakening in the morning. Other symptoms include sensitivity to light, excessive tearing, and foreign body sensation in the eye.

Most often, the affected epithelium will have a map-like appearance, i.e., large, slightly gray outlines that look like a continent on a map. There may also be clusters of opaque dots underneath or close to the map-like patches. Less frequently, the irregular basement membrane will form concentric lines in the central cornea that resemble small fingerprints.

Typically, map-dot-fingerprint dystrophy will flare up occasionally for a few years and then go away on its own, with no lasting loss of vision. Most people never know that they have map-dot-fingerprint dystrophy since they do not have any pain or vision loss. However, if treatment is needed, doctors will try to control the pain associated with the epithelial erosions. They may patch the eye to immobilize it or prescribe lubricating eye drops and ointments.

With treatment, these erosions usually heal within three days, although periodic flashes of pain may occur for several weeks thereafter. Other treatments include anterior corneal punctures to allow better adherence of cells; corneal scraping to remove eroded areas of the cornea and allow regeneration of healthy epithelial tissue; and use of the excimer laser to remove surface irregularities.

The information provided is from the National Eye Institute.